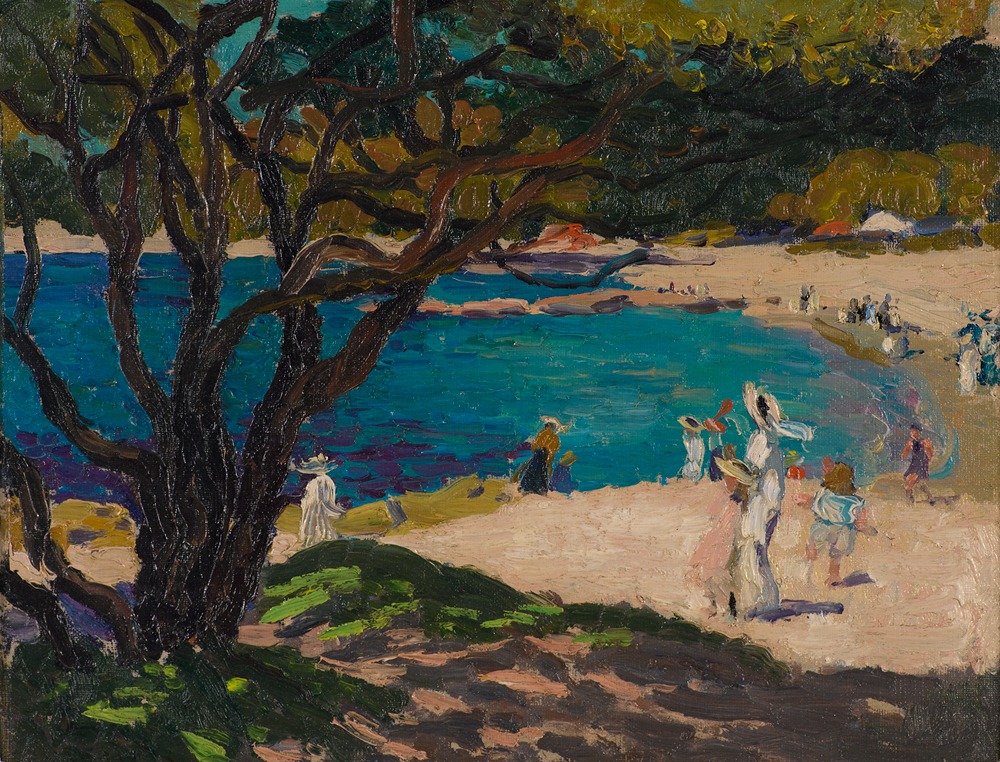 On Balmoral Beach, Sydney (1913) depicts one of Sydney’s most picturesque of beaches, popular with many artists since the ‘Artists Camps’ established by Julian Ashton and Livingston ‘Hop’ Hopkins in the early 1880s. It is a fine example of Carrick Fox’s oeuvre and makes a very important contribution to The Balnaves Gift and the Mosman Art Gallery Collection. The artist portrays elegant women with their young children beside the brilliant blue waters of Sydney Harbour with the vibrant palette, confident fluid brushwork and delightful spontaneity which exemplify her modernist, impressionist style.

Born in England in 1872, Ethel Carrick studied at the Slade School in London, studying drawing with Francis Bate, who was known for encouraging en plein air painting, a bright palette and close observance of tonal values. She met her future husband, Australian artist Emanuel Phillips Fox at the St Ives open air painting colony in Cornwall. Following their marriage in 1905, the couple established an artistic partnership that has rarely been matched. Like so many artists of the late nineteenth and early twentieth century, they were trained in traditional academies, but were interested in the new impressionist techniques and the subjects of urban bourgeois life.

Ethel Carrick Fox visited Australia many times during her long and successful painting career, with her first visit in 1908, and again in 1913. On this trip the Foxes spent many months in Sydney painting views of the harbour. They stayed at ‘Redcourt’ on Cremorne Road across Middle Head from Balmoral and also by the ocean at Manly. Carrick Fox had a great interest in theosophy also stayed at ‘The Manors’, the theosophical retreat in Mosman during the periods of their time in Sydney when Emanuel Phillips Fox returned to Melbourne briefly to visit his family.